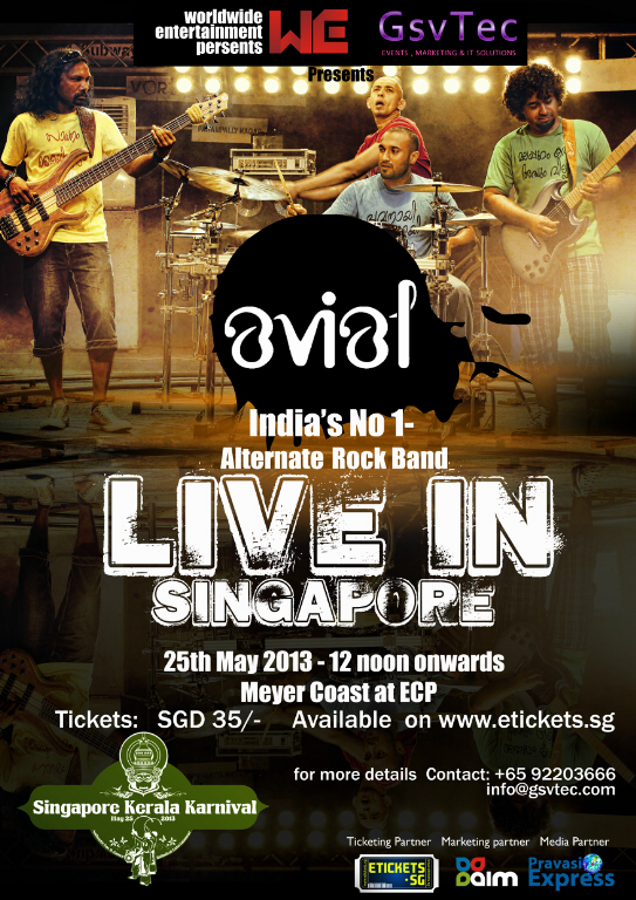 Be part of Singapore Kerala Karnival 2013 on 25th May 2013 11 am. A complete family entertainment event at the ECP Beach showcasing for the first time AVIAL Rock band live ,mingle with Your famous Film stars, community Games for adults & kids,traditional performances Kathakali & Kalariphyaatu , Kerala food and lots of fun.

avial band live in singapore for the first time,be part of this magical event on the beach

Tickets are 35$ for adults & 15$ for kids only.book them online from www.etickets.sg

for performances and sponsorship contact 92203666 or email at info@gsvtec.com

About AVIAL Band :
True to their name, Avial (a mixed-vegetable delicacy) blends Malayalam Poetry with Contemporary Alternative Rock Music. With elements of Indie Rock and Folk Music underlying an electronic feel, Avial’s music has overcome language barriers not only in India but is also drawing fans across the sub-continent and the globe. It has an increasing fan following, with a revolutionary approach in today’s contemporary music scene in India. The band members come from an in-depth musical background, with a diverse exposure of working with different bands before they could come together. In search of something more intrinsic, with a sense of belonging, Avial discovered and articulated the expression in their own mother tongue, dared to express their music with their self-titled debut album. Fetching a great name for them selves, Avial is one of the most sought after Indian bands today, transcending genres, justifying the term “Alternative Malayalam Rock”

book your tickets from http://www.etickets.sg/events/singapore/events/2013/rock-show/avial-rock-show-live-in-singapore-on-may-25-2013/219